I saw a wonderful video recently on an odd fact in mathematics: 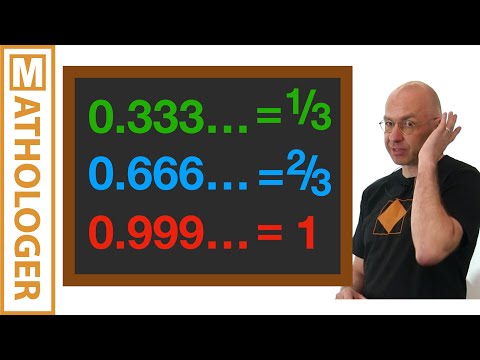 In the video (from a channel I would heartily recommend), the presenter offers a proof that 10 = 9.9999.... Here the ellipsis is quite important, as it communicates that the 9s continue on forever, that is, to infinity. So, 9.9 followed by an infinite number of 9s fully and simply equals 10. I want to explore the proof for this fact and then move on to explore how this example of an infinity touching the finite might elucidate our understanding of paradoxes.

Now, this proof may perhaps feel a bit fishy to you; you may think that we are mathematically cheating somewhere, but I can promise you that every single step is totally valid. And if every step is totally valid, then the conclusion is valid. But how can this be and what does this mean?

This is simply a more concise way of writing the larger sum of the fractions above.

This is an infinite sum that approaches infinity, that is, it diverges, it does not have a finite limit, it is unbounded.

Returning to our infinite sum, we have enough context now to see that saying 1 = 0.9999... is really just one way of saying that the summation of \(\frac{9}{10^n}\) as n goes from 1 to infinity is a convergent infinite sum that converges on 1.

Ok, so that was a fun romp through one fascinating branch of mathematics, but all we really did was gain enough context to state the “odd fact” in more precise mathematical language. What’s the point? I stated at the beginning that I was fascinated by some of the general ramifications of infinity touching the finite. What we have with convergent infinite sums are well-studied mathematical examples of precisely this phenomenon. And I find them so fascinating because they offer glimpses at some of the issues we face when thinking about infinity. However, they also show us that we can think well about infinity.

The implication I’d like to explore a bit now is that paradoxes abound when the infinite colliding with the finite. On the one hand, it is quite clear that 1 does not equal 0.9999... for the simple reason that 1 is a finite integer and 0.9999... is an infinite series. If equality is categorical identity, then 1 and 0.9999... are not equal. On the other hand, this whole post has shown that 1 does equal 0.9999.... If equality is referrential identity, then 1 and 0.9999... are equal. Now, note that I call this a paradox and not an antinomy. I want to define these two terms clearly and distinguish them. In my parlance, a paradox is a seeming contradiction, while an antinomy is an actual contradiction; that is, a paradox is resolvable and an antinomy is not.

An antinomy is composed of a proposition (P) and its negation (not-P) such that there are no conditions for P or not-P and the conjunction “P and not-P” is true.2

I believe that paradoxes run deep in our world. I have written earlier on my neologism “conjunctive binarism”, a view that truth is probably most closely articulated as “the proposition P and its contradiction ¬P are kinda both true”. After exploring a convergent infinite sums, I feel that this definition of paradoxes more properly expresses my view of what this “kinda” maps to. So, 1 = 0.9999... and 1 != 0.9999... is a “conjunctive binary”. If we express it in the form of the paradox explained above, we would express that proposition as “if equality means referential indentiy, then 1 = 0.9999… and if equality means categorical identity, then 1 != 0.9999…”. Going one step further, I would now define a conjunctive binary as a compound proposition of that form (“if conditions for P, then P and if conditions for not-P, then not-P”).